Don't you hate it when you are a bit flush with the old casherooney and can't find anything you really want to buy? The weekend charity shop was disappointing. The children found books and I bought a top. Big wow!

So I am sharing some finds from the past with you today and also having a bit of a rant. 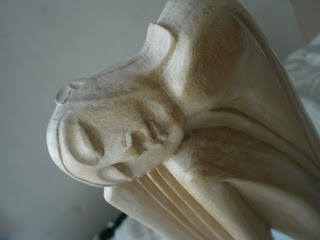 Last week, I talked of how very few things move Him Indoor's soul and was a little unfair there so here is something both he and I love found in a hospice charity shop for, wait for it, just £1.50. 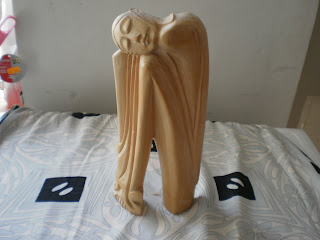 By the way, the background cloth on which this is displayed today is the top I bought on Saturday. It still had the brand new labels on and I loved it but it does not like my boobs at all. Just does not sit on them well at all, needs someone slightly less well-endowed in that department. Any takers for a size 20 top going for free? 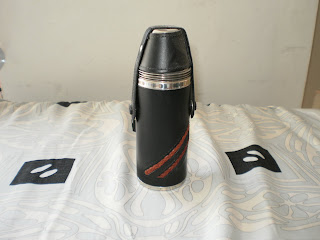 Back to Him Indoors as I bought this for him last year. It is a Hardy Amies drinks flask thing with little cups that go in the top of it. All very clever. Did I really buy it for Him Indooors? Well, yes I did but also knew I would love looking at it every day. It was £2.99 and is real leather, came in the original box and is marked Hardy Amies. 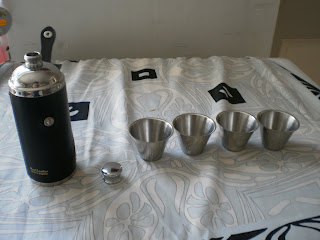 Now for the rant. Here is the playhouse I bought for my little girl second-hand via a well-known Mums site. 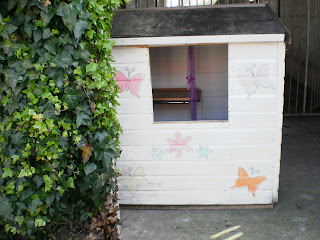 I had missed out on a two storey one for £70 advertised on the same site. I decided rather than get a huge two storey one after all, perhaps I should test out whether the children would actually use a playhouse before hiring a van and sourcing a playhouse off ebay. Plus the one I actually got pictured here was very much what my daughter would like in terms of butterflies and flowers.

She loves it. When Him Indoors went to pick it up, it turned out that the seller had bought the two storey one that I had my eye on. That is why she was getting rid of the little one.

Ten days later, the same woman advertised the two storey one with quite a price hike but still a bargain in my view. She was also advertising some furniture. I told her the date that we would be able to collect it if it still remained available. I did not ask her to keep it but let her know if she still had it, I would buy it. She contacted me trying to put me under pressure to get it earlier. I said no as I needed to organise time, money, van and so on. So I got a snotty email saying she had sold the lot to someone else anyway. I sent a nice email back saying there were no hard feelings.

Now she is advertising the lot again saying she is really cross with the TIMEWASTER. I don't know whether she is referring to me or not but her tone puts me off completely. There are other places to buy furniture and playhouses after all.
I was honest with her throughout. What particular miffs me is that we had turned up at the time arranaged and with cash for the first playhouse so I think she should trust me a little bit.

She has lost out on about £400 with her impatience and anger issues.

Don't forget to visit the other Magpie Monday blogs and see what you think it trash and what you feel is treasure.